If you’ve ever fancied a mash-up courtroom drama where the defendant is a giant tank, I may have EXACTLY the book for you…

Everyone likes HUMUNGOUS mecha, right? And legal-suspense thrillers? Well, perhaps not everyone. I’m a huge fan of John Grisham thrillers, but may be the world’s only fan of the last hour of Transformers 3 (for the giant robots – the plot and acting sucks).

Nonetheless, for those of you who are fans of smart legal thrillers and giant robot movies, you must have asked yourself at some point: What happens if you mashed up Transformers 3 with A Few Good Men?

Trouble is, that book hasn’t been written yet.

And this is where I’m here to announce an exciting new project. I haven’t been updating this blog for several years, but I’m hoping (cross fingers) to start blogging again, specifically to talk about some of the world building around a collaborative novel I’ve just started on.

A Brief History of Bolos

In 1960, American sci-fi author Keith Laumer published his first Bolo story. Combat Unit tells of a giant intelligent tank that awakens after 300 years to find itself captured by alien scientists. 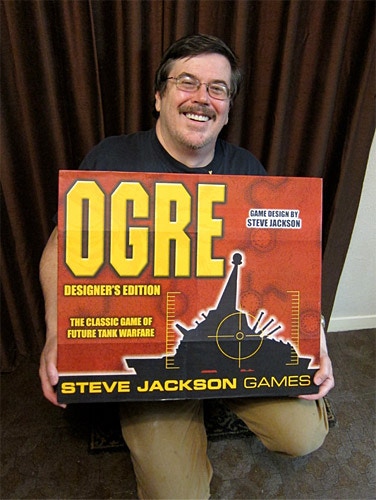 In the years before his stroke in 1971, Laumer was to write other stories about the Bolos. He returned to writing a few years after his stroke, but his work never reached its previous quality. Nonetheless, the Bolos were popular enough for other sci-fi & fantasy authors, such David Weber and Linda Evans, to write novels in his universe. They also inspired a 1982 (and 1987?) video game, as well as Ogre, the Steve Jackson Tabletop game.

My guess is Ogre is how younglings like me are familiar with the Bolo series. After all, I was a toddler when the first video game came out. I didn’t buy the Designer edition of Ogre, kickstarted in 2012, but I was only dissuaded by the ENORMOUS box size.

Baen Books lost the licence to reprint the Bolo series at some point. The books went out of print and are no longer available for purchase new. You can purchase them second hand in the States.

Nothing happened for a few years. Then in 2014, American military sci-fi author Tom Kratman, who happens to be a friend of mine, wrote Big Boys Don’t Cry, a novella scathingly critical of some of the political assumptions in Laumer’s work:

Not many people think of it this way, but the Boloverse, as in the late Keith Laumer’s Bolos and the spin-offs, is one of the most liberal themes in science fiction. It’s especially funny precisely because almost nobody understands that it’s liberal. Why do I say it’s liberal? Because it’s all about the easy, certain, and reliable programming of altruistic values in sentient beings. Brother, sister, that’s the penultimate CORE of liberalism. Interestingly, since the stories can move even me, it suggests to me that we ALL have some liberal in us. Big Boys Don’t Cry isn’t a Bolo story, either in the special military technical details or in the theme. What it is, though, is a deconstruction of that liberal meme on the easy, certain, and reliable programming of altruism in sentient beings. It’s also, I think, a pretty good story.

(I think) Tom is referring here to how the Bolos, on the book jackets at least, have God-like virtue. They are described as patient and brave. They’re knights in shining armour (literally). They’re Arthurian legends, the pure knight Galahad and Sir Lancelot of the future. In short, they’re:

faithful and tireless protectors of the human race

At the same time, the books have humans treating them like complete shit. They discard them at the bottom of rivers. They leave them buried under rockfalls for hundreds, even thousands, of years. Yet, despite being self-aware, intelligent killing machines, they never get pissed off with this treatment and take their revenge on their creators.

The idea that Bolos could be programmed to be completely virtuous, while also totally incapable of resisting injustice, seems oddly unrealistic.

Big Boys Don’t Cry and I

Big Boys Don’t Cry was published originally by alt-right publisher Castalia House. The lead editor, Vox Day, got it nominated for a Hugo Award in 2015 on the “Rabid Puppies” ‘slate’ (NOTE: I’m using ‘quote marks’ here because, no, we don’t need to argue about slates again).

Anyway, at this point, I entered the scene:

I read some articles claiming that a small group of  ‘rabid chauvinists’  were trying to keep women out of science fiction. According to the article, these Sad/Rapid Puppies hijacked the Hugo Awards, which describe themselves as science fiction’s most prestigious. I was concerned. I’d read Hugo Award-winning novels. I’m an aspiring hard SF author and had dreamed one day of winning an award.

It soon became apparent to me – in the most dramatic way possible – that the mainstream media coverage was lies. Or, in the trendy language of today, ‘fake news’ (well, okay, it was just biased to all heck).

In June 2015, I read and commented on Big Boys Don’t Cry, one of the novellas nominated by the Puppies. My commentary ran long. Out of politeness, I emailed the author, Tom Kratman. Stuck in my urban liberal bubble, I had no idea he was a well-known author with almost an entire shelf in London’s Forbidden Planet bookstore.

We got into a debate, initially about his novella and then about writing more generally.  Tom  noticed from my profile that I was struggling with a novel. We had a chat about the plot and setting, and why I was failing to finish.

Five years after I spent ~2,469 words dissing Tom’s novella like a clueless n00b jackass, we’re collaborating to turn BBDC into a novel. The idea is to use the original ideas, but frame the whole thing around a court martial. So, basically, a legal-suspense thriller about the right of an intelligent tank to  lose its shit.

The original Bolo stories are sixty years old now and haven’t necessarily aged that well. Yet, the debate around autonomous weaponry has never been so pertinent and interesting. As such, when I started chatting to Tom about the world-building in BBDC, we got into essay-length arguments about artificial intelligence.

I write about AI in my day job, and felt some of the original Boloverse was already ancient history (we already have autonomous robot tanks). In so far as BBDC was inspired by world-building in the original, I wanted to update it in the novel. In addition, I was excited about exploring ideas around sentience and consciousness in neural nets.

Tom, meanwhile, had assimilated many ideas about autonomous weaponry without – to my knowledge – engaging directly in the debates.

Eventually, after several multi-thousand-word exchanges, I realised this was turning into the sci-fi equivalent of the AI-Foom debate (but probably less well informed) and thought it might be nice to blog an edited version of our emails.

In addition, I was reading the original Bolo books to understand Tom’s mindset around the philosophy and ethics. So, I thought I’d blog that too. In part, for the punk value of a young person reading old SF&F.